Today we are going to compare two types of clear bra film. Gloss clear bra vs matte clear bra film. There are a number of pros and cons in both their performance, maintenance needs, durability and intended use.

Until you start seeing car manufacturers paint more matte cars from the factory than they do gloss cars, gloss paint protection film will remain more popular.

There is another reason for the above. Gloss is gloss, every single time. Yes, some surfaces are glossier than others. But generally, a glossy surface looks just like another glossy surface. That means that it’s very practical to use gloss paint protection clear bra film on gloss paint whether it is to wrap part of a car, or the entire thing. 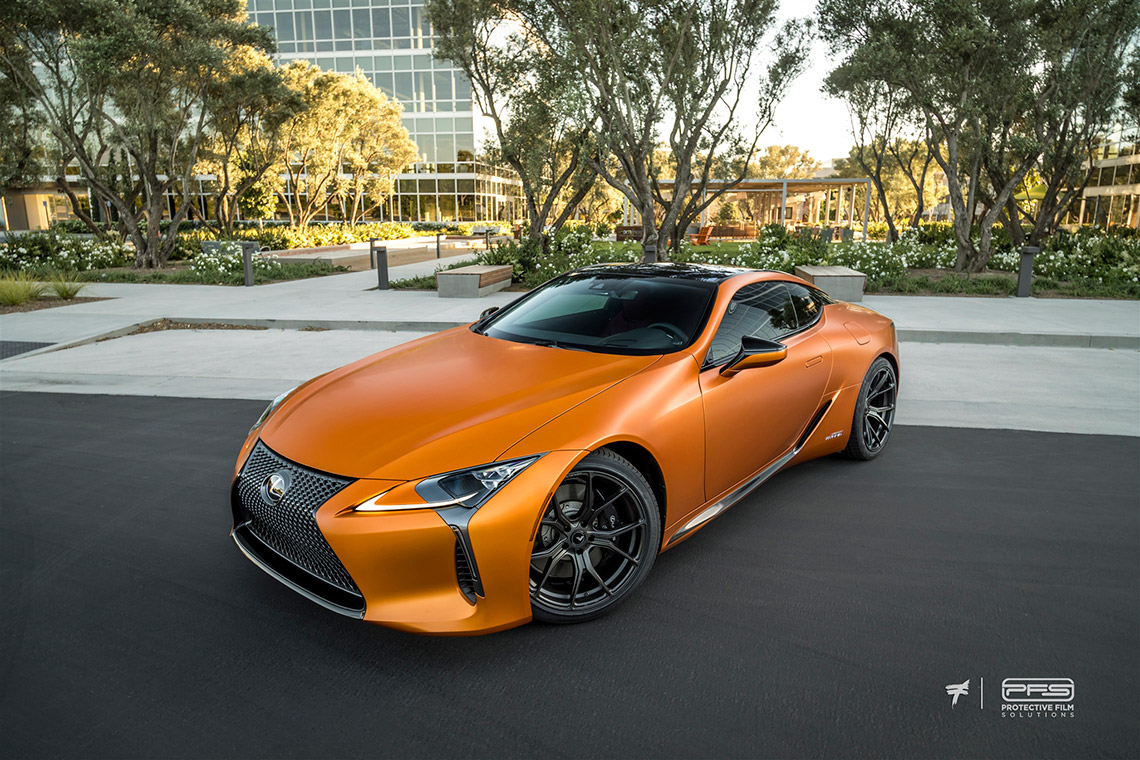 This is the wonderful frosted look only achievable with matte paint protection film.

Matte film is not like that at all. See, not all matte surfaces are the same. Some have a bit more sheen than others. In fact, even the fine texture that gives matte clear bra film its unique look will vary by clear bra film manufacturers. This also means that matte clear bra film will also not necessarily match the texture and amount of sheen of factory matte paint.

For the reasons above, matte paint protection film is a lot better for wrapping entire vehicles and not just portions of it. If you have a car with matte factory paint and it just so happens to match very closely to a chosen matte clear bra film, you might be in luck and could perhaps be able to get away with doing only a front end clear bra. That said, those cases would be few and far in between and you will most likely be wrapping the entire car.

More Details >> For all the details about clear bra offerings be sure to visit our Paint Protection Film Page. 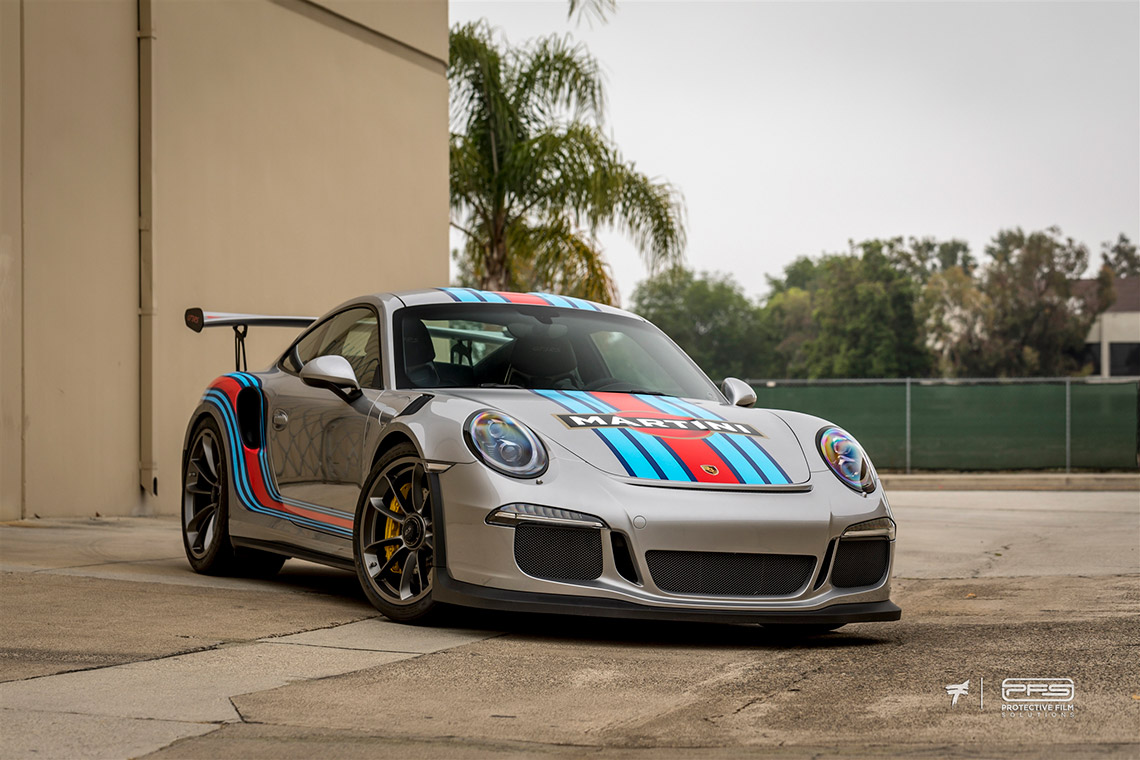 There is another good reason why wrapping with matte clear bra film is better suited for the entire car: Matte paint is A LOT more susceptible to damage than gloss paint is. Not only that, but if you happen to put a scratch into matte paint, you will have to paint the entire panel. You can’t just buff out a scratch. Buffing will yield, you guessed it, a gloss finish. Furthermore, painting with matte paint is a lot more expensive than painting with gloss paint. This makes matte clear bra film for the entire car pay for itself.

Thanks to matte paint being very prone to irreversible damage, it’s wise to just wrap the entire vehicle in matte paint protection film immediately after buying it. That way, you can enjoy the looks of matte paint, without worrying about the drawbacks. 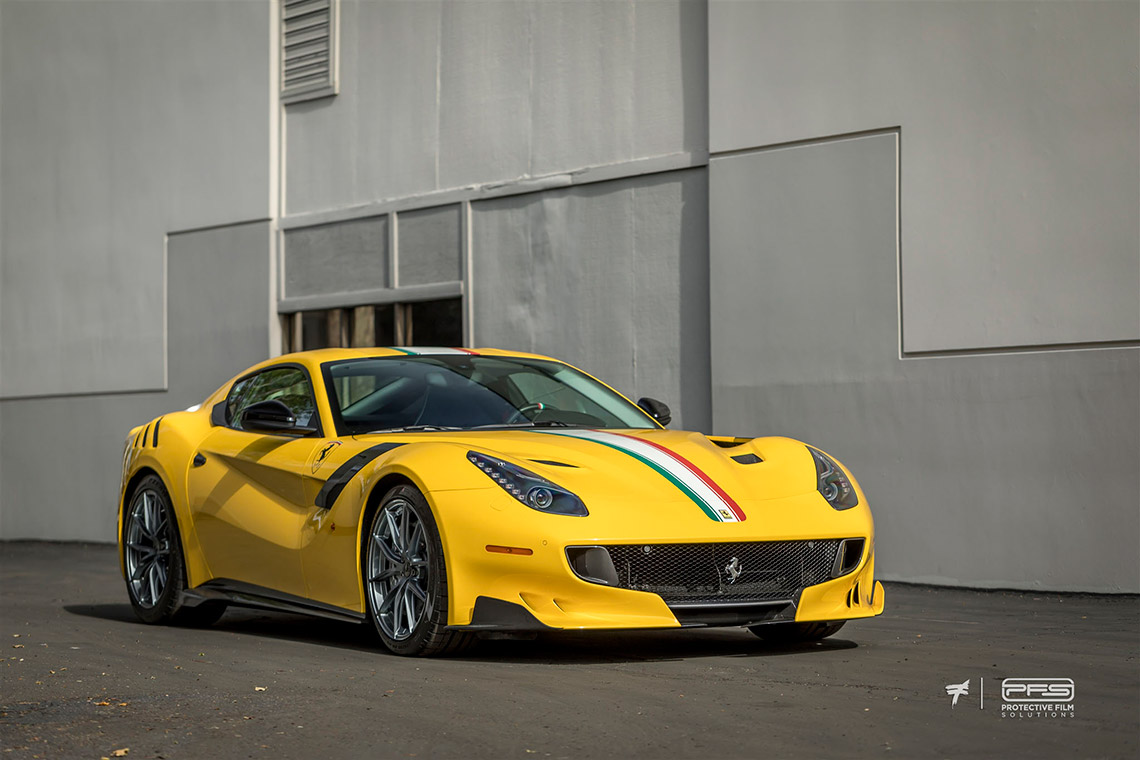 The classic good looks of a gloss finish are hard to beat… not to mention, easier to maintain.

When it comes to maintenance, gloss clear bra film will be easier to maintain than satin or matte clear bra film. Generally, while both have self-healing characteristics, gloss PPF is simply a little better at the self-healing thing. Not only that, but stuff will like to stick more to that matte film that it will do to gloss film.

To make matters even more complex, when waxing gloss PPF you can absolutely go to town. You can use all kinds of waxes and sealers as well as ceramic nano-coatings like Ceramic Pro. It’s obvious, you can never have too much gloss.

For matte film, it isn’t so clear cut; pardon the pun. While you can use various products to coat matte paint protection film, you have to be very careful in your selections. Additionally, you have to try and use very little. You don’t want to go layering products onto your matte clear bra film, as all it will do is add shine. It basically defeats the purpose of matte clear film. That said, adding a protective coating to matte film at the expense of adding a bit of shine is not a bad tradeoff. You really need some sort of coating on the thing. Like I said earlier, stuff likes to stick to matte vinyl. So you do want to improve its ability to reject contaminants.

You generally don’t drive those cars for very long. Additionally, you tend to drive them in nice weather. When you get back from your drive, a quick wipe down makes maintaining the finish a relatively easy task. Yes, maintaining a gloss finish on these weekend cars is even easier still. However, it also makes it that if you really want a matte finish, it’s totally doable and practical for your fun vehicle.

Xpel Stealth is Xpel’s matte film. SunTek has PPF-M as their matte film offering. Then STEK’s offering is called DYNOmatt 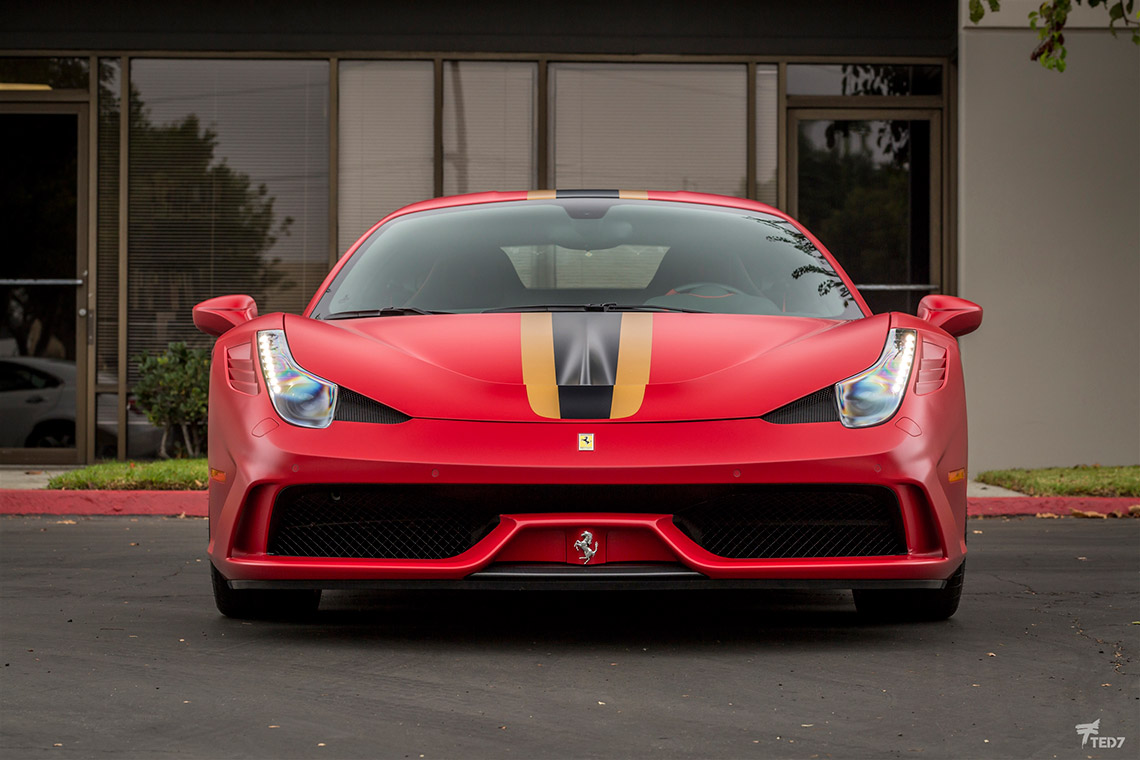 This is another key point to look at when selecting between gloss film or matte PPF film — The warranty. As I said earlier, maintenance of gloss film is a lot easier. This also means that gloss film will also last longer. Unsurprisingly, the warranty timeframes are considerably shorter for matte films as compared to gloss films. While the top brands will give you a 10 year warranty on their flagship gloss films, the time is reduced to 7-years and even 5-years for matte film. This is at the time of this writing. Do check what the warranties are looking like when making your final decision between matte clear bra film or gloss clear bra film. Having said that, even if warranty timeframes for matte PPF films do improve in the future, it is highly unlikely that matte film will ever be warranted for as long as gloss film is.

To Conclude. Matte or Gloss Film?

One thing is clear after looking at gloss clear bra vs matte clear bra film… One is more practical, durable and easy to maintain. The other will give you a look that is only achievable with matte PPF film. If you think you will not own your car for more than 5 years, you generally keep it clean, don’t drive it every day and don’t let it sit in the sun day in and day out, matte paint protection film could very well be a good choice for you. If your car has matte paint from the factory, then matte clear bra film is of course a no-brainer.

However, if your car in question is a daily driver or you prefer the ease of maintenance and longer durability, then gloss paint protection film is most definitely the best product for you. Whether you choose gloss PFF or matte PPF, at Protective Film Solutions our commitment is to offer you the best product and absolute best installation work for your prized vehicle.

We hope this article can help shed some light when choosing your finish. That said, if you still have any questions or would like to schedule an appointment for installation, please contact us.

What are you thoughts on the new BMW M5 CS? This c

Another new Ford GT completed with a Full Body @xp